Great performances by our U/19 Athletes at the All Ireland Indoors on Sunday 26th February. After qualifying from the heats against the best from the 32 Counties, Ellie O’ Toole the Leinster Champion settled in the blocks for the final of the U/19 400m running a great race to cross the line and take gold in a B:P 57 .3 The Boys U/19 promised to be a tight contest Luke Morris ran a quite race in the heats easy qualifying in 2nd place whereas Mark Glynn the Leinster Champ raced from the gun and won his heat. The final was a different race Luke was out of the blocks very fast and lead the pack a merry dance hitting the gun at 200m in 24ish sec Mark may have got his tactics wrong trying to challenge on the bends but as this was a run out for next weeks 800m it will do him good, back to Luke who held the field at bay to claim the National 400m title in a B:P 50.9 with Mark finishing in the dreaded 4th spot but it was great to see two Club Athletes in top 4 in Ireland. Runo Ayovoro was just pipped for a final 8 spot in Final of Boys 60m  well done to all Races can be viewed on ytube  or I have posted  the video of events on our underage f/book page. Ger McNally of the Kildare Nationalist hopes to have some photo’s of our Champions in this week edition 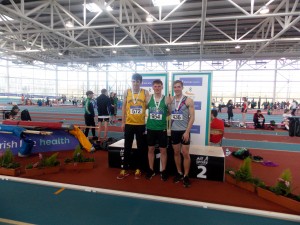 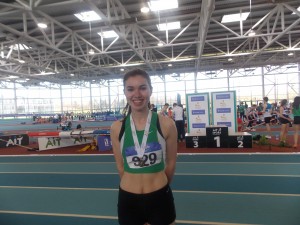