The
highlights of this Leinster Event  was the Championship Best Performance set by
Runo Ayavoro in the Boys U/12 60m 8.5 seconds, and the downside was when his
sister Omasan who was strongly fancied for a medal was disqualified for a false start in her event, there is a strongly held view that Athletes in the younger
ages groups are not mature enough to come out of blocks properly and only learn
bad technique which have to be unlearned in later years, but Omasan will have
plenty of opportunities in the long season ahead.

Other performances of note was a P:B and a Silver medal for Mark Glynn in the Boys U/16 800m 2.06, and Luke Morris finishing runner up in both the U/16 200m and 60m, Kevin Kyne also had a well deserved Bronze in the latter event.

Ellie O’  Toole set a good time when securing a Bronze Medal in the U/16 200m and competed in the 800m along with Amiee McGrath the two girls ran a gutsy race with Amiee delighted to capture Bronze behind a good Carlow Athlete with Ellie in fourth spot.

Kate Ryan and Aoibheann Dunphy improving with every outing faced the gun in the girls U/14 hurdles Kate finished fast to get Silver and Aoibheann in fourth place.  Nikki O’ Neill set a P: B in the Shot 11.89and a good Bronze medal.

Grace O’Toole finished in the dreaded fourth spot in the Girls U/14 Long Jump and   Alex Shea having his first foray over Hurdles in the boys U/12 also suffered the same fate.

The competition was fiendish and unforgiving  at this Meet and the entries so large even if you won your heat it did not guarantee a place in the Final, as Grace O’ Toole found out  to her disappointment when winning her heat in 8.53 but missing out by 0.01 for a place in the Final,  example 8 heats fastest to qualify, so well done to the first three who go forward to the
All
Irelands on the 22nd and 23th of March

Some nice photo’s Click on www.athleticsleinster.ie or see Gallery 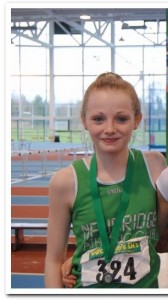 Runner UP and still smiling

This site uses Akismet to reduce spam. Learn how your comment data is processed.