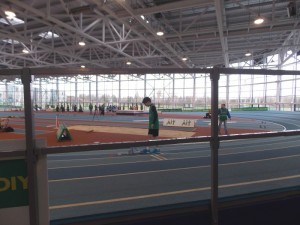 How Set Your Blocks By Cameron

Medals were hard to come by at Day (1) of the Leinster Indoor Championship as most of our Athletes were having their first taste of running on tartan at this fantastic arena. Big fields were the order of the day with over 20 relay teams competing in the heats to secure a spot in the finals with 6 to qualify, our Girls and Boys U/13 and Girls U/14 gave a 100% just failing to get to the Final. The Boys U/12 won their heat and ran well in the final but were piped on the line for the Bronze Medal. In the Girls U/14 800m Grace O’Toole came with a storming run in the last 50m but left her run to late and finished in 4th place, Lauren McWey coming back to competition after a illness also finished in the dreaded 4th spot in the 1500m walk.

Mark Glynn had a very promising run in the Boys U/16 1500m and showed lots of guts to get a well deserved Silver Medal. Sean Glennon had a good run in the Boys U/18 1500m with a time of 4.31 he is now looking forward to next w/end when he competes in the 3000m as this is his favourite event. On Sunday at the AAI Games with big International names competing, Fiona Hill had a great victory winning the Triple Jump. The Club congratulates all the Athletes and would like to thank the parents who travelled on the day. Some photos of Athletes in gallery.

Our next outing for the juveniles Athletes is the Leinster Indoor Individual Championships on the 8/9th of March. Boys+Girls U/12 to U/19 see list of events at athletics Leinster  Leinster Athletic Fixtures . Closing for entries is Friday 21st of February.

This site uses Akismet to reduce spam. Learn how your comment data is processed.